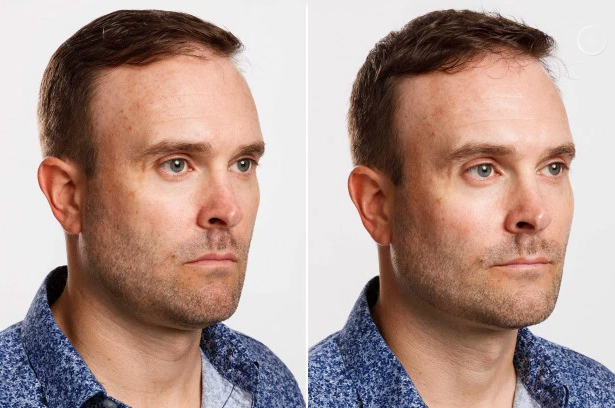 Last week, The Post talked to Hope Davis, a 42-year-old New Yorker who — like many New York women — treated her resting bitch face with cosmetic surgery. Her pick-me-up went viral and struck a chord with one person in particular: her husband. He was so inspired that he decided to get his own RBF treated. Here, the couple debuts their new, cheerier look.

After his wife resorted to plastic surgery to “cure” her resting bitch face, Josh Numbers realized he had a problem, too.

“I was like, ‘Woah, I have resting bro face,’ ” Numbers tells The Post. “My mouth was sagging down, and I always kinda looked ready to start an argument.”

So instead of looking glum alongside his newly smiling partner, Hope Davis — whose filler-fueled journey to a perkier profile went viral online last week — Numbers took a trip to the same doctor who treated her. “I’ve had several married couples both get RBF treatments,” says Dr. David Shafer, a double board-certified plastic surgeon and medical director of Shafer Clinic Fifth Avenue in Midtown. “It’s more and more common for wives to bring in their husbands for similar treatments.”

The surge doesn’t surprise him.

“They have resting bitch face just like women do — think Kanye West,” says Shafer, who treated Numbers two weeks after his spouse on Sept. 19.

To combat RBF, doctors use the same techniques for men as for women, including the injection of fillers, and sometimes Botox, into the face. Prices run from $500 to $5,000, medical experts say.

With male clients, the only major difference is where doctors inject the fillers, which are made of hyaluronic acid. The focus is less on the lips and more on the jawline, says Shafer.

Numbers, who has only received Botox on his forehead before, says that surgery never crossed his mind until he saw how impressive Davis’ results were.

“She just looked so refreshed and radiant, and I wanted that too,” says Numbers, 39, who works as the vice president of a mortgage lending company. “People used to always ask me, ‘Is everything OK? You look upset.’ ” He believes the procedure made him “look 15 years younger.”

When it comes to treating RBF, which is typically associated with women, “gender has nothing to do with it,” says Numbers. “There’s this unfair stigma where it’s not manly to care about beauty.”

In fact, surgery made him feel even more macho.

“I think I look more masculine than before. My jawline is more pronounced,” he says. “And that’s nothing to frown upon.”

How Much Does Resting Bro Face Cost?

Resting Bro Face cost varies greatly depending on a variety of criteria. Price is dependent on factors like the number of injections required and the number of wrinkles being treated. Please contact our office for more information

Schedule your consultation for Resting Bro Face in New York City – contact Dr. Shafer and set up your appointment. During your appointment, you will be able to ask questions and bring up any concerns you may have about the procedure. Contact us today to get the look you’ve always wanted!