So, This Is What a $3,000 Emsculpt Butt Lift Actually Looks Like

So, This Is What a $3,000 Emsculpt Butt Lift Actually Looks Like

The nurse hands me a gown, and I strip down, Winnie the Pooh–style, before lying belly-down on an exam table as she straps an elastic belt around my hips and slides oven mitt–like paddles into place right on top of my cheeks. So cute. She turns on the machine, and my butt feels weirdly tingly. It doesn’t hurt though—it’s kinda like when your foot falls asleep, times 100—and, um, on my butt.

If you’re obsessed with butts (who isn’t?) you miiiiight have heard of Emsculpt, the first non-invasive treatment FDA-approved about a year ago for lifting and strengthening your glutes with the help of a fancy electromagnetic technology called HIFEM (high-intensity focused electromagnetic field). Unlike most booty-enhancing procedures, this shmancy tech focuses on your muscles instead of fat, like with Brazilian lifts, or adding fillers, like implants or illegal silicone injections (seriously, just don’t).

The TL;DR story: The machine forces your glutes to contract—anywhere from 11,000 to 12,000 times(!!) per 30-minute session—like they do in a squat (only harder). Many plastic surgeons and dermatologists offer the treatment in their offices to help patients score a stronger, firmer, higher, bubblier, ba-donkadonk over the course of two weeks, although it might take a few months for those muscles to grow. (Oh, and it was also given FDA approval to reduce fat and strengthen your entire core too—if you’re into that.) 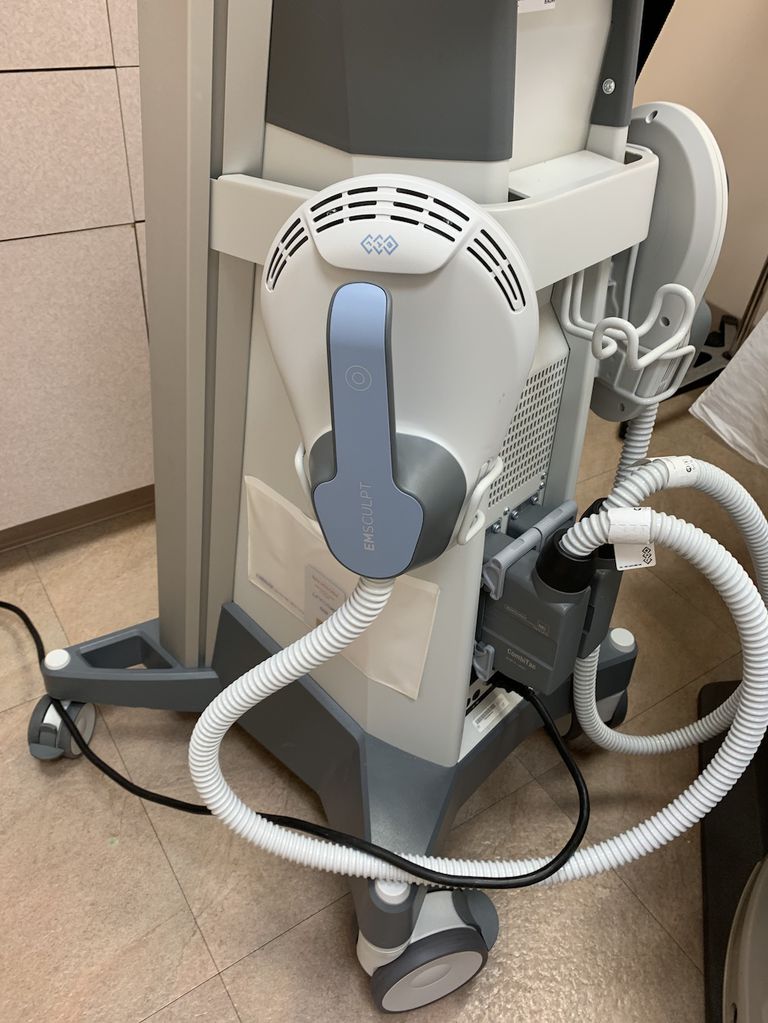 Whether you’re in it for the abs or the ass, the treatment costs around $750 for one 30-minute session, depending on where you live. And since clinical studies show a majority of patients (85 percent) feel most satisfied after four sessions, there’s a good chance you’ll need to shell out $3,000 to see results. Fun, right?

While the price tag might literally make you clench your cheeks, the scientific evidence is pretty convincing. Another clinical study, published in Lasers in Surgery and Medicine, found that subjects had an average of 15 percent increase in muscle thickness two months after undergoing four treatments.

Those results are likely caused by the type of contractions the HIFEM machine triggers. The device throws magnetic impulses that stimulate your nerves, causing all your deep gluteus muscles to shorten. And just like with a workout, that causes fibers to break down and rebuild bigger and stronger. But these aren’t like regular contractions. They’re supramaximal contractions, which create more tension and require more energy than a normal booty squeeze, according to Bruce Katz, MD, clinical professor of dermatology at the Icahn School of Medicine at Mount Sinai and director of the Juva Skin and Laser Center in New York.

As my session progressed, the nurse slowly dialed up the intensity, working our way from 30 percent to 100 over the course of 30 minutes. I spent most of the sesh on Instagram dreaming of my future Sommer Ray–esque butt. Rinse and repeat three more times over the next 14 days, and the process was complete. (Oh, BTW: It wasn’t until my third treatment that a nurse told me that most people keep their underwear on. El Oh El. My bad.)

My Emsculpt MD, Sean Mazloom, a New York City–based board-certified dermatologic surgeon and cosmetic dermatologist, says many of his patients are athletes and models who already work out hard but just want a little extra junk in their trunk. As for me, TBH, I couldn’t really see a difference between sessions one and four—but I could FEEL my newly strengthened butt. I work out pretty regularly and felt a significant difference in the firmness of my upper donk (the technical term) when I flexed after session two. It felt rock-solid! And about a month after my final treatment, I could see a little difference in my upper butt. It definitely looked rounder to me. Dr. Katz adds that some studies suggest that full results could take a few months to appear, ’cause muscle remodeling takes time. It’s cool. I’ll wait.

Still, not all doctors think the treatment is the most effective way to reach your booty goals. “The key is being a good candidate for the procedure,” says David Shafer, MD, a New York City–based double board-certified plastic surgeon specializing in cosmetic surgery. “It seems that with Emsculpt, the best patients are those who are already in good shape with minimal fat,” he adds.

“These patients see a boost in their muscle tone.”

Plus, results can vary widely depending on how much you exercise in general. “I would suggest that patients have limited expectations,” says Dr. Shafer. “Muscle is constantly remodeling in response to voluntary and, in the case of Emsulpt, involuntary contractions.”

But just as it takes lots of gym time to reach your fitness goals, a treatment that’s based on muscle strengthening requires maintenance treatments to sustain results too. Dr. Katz even says that some of his patients see their booties continue to grow up to six months after treatment, so I still have Sommer Ray dreams. In the meantime, I’ll continue to booty flex in the mirror for no apparent reason.